The ‘Act of Free Choice’ was an egregious violation of West Papua’s legal right to self-determination, a violation of the ‘sacred trust’ under Article 73 of the UN Charter and a breach of Indonesia’s treaty obligations under the UN Charter and the New York Agreement. It cannot justify Indonesian sovereignty over West Papua. The justification for such sovereignty, if it exists, must lie elsewhere in the legal rules governing the acquisition of sovereignty. Otherwise West Papua is a territory that is under alien domination – a status forbidden by international law.

Only 1,026 handpicked individuals were allowed to participate in the referendum out of a population of 800,000. Hugh Lunn, a Reuters journalist who was in West Papua to report on the events at the time describes in detail the atmosphere of violence and intimidation created by the Indonesian military which made the outcome inevitable:

“It was not free and there was no choice” he recalled, before describing how he witnessed West Papuans who were calling for independence being “bashed up and thrown in the back of an Indonesian army truck”.

Those who were handpicked to vote had to reach a decision through the Indonesian system of musyawarah (mutual deliberation) in which discussion continues until everybody agrees. All of this took place under the watchful gaze of the Chair of the West Irian Provincial House of Representatives, the Chief of the Indonesian Information Service, as well as a Brigadier-General in the Indonesian army. One by one each Papuan group declared in favour of remaining with Indonesia.

Ever since that time, Indonesia has represented this ‘Act of Free Choice’ as West Papua’s exercise of its right to self-determination. This is its justification for the integration of West Papua into the Republic of Indonesia. Legal commentators have been scathing about the vote ever since, dismissing it as an empty and formalistic exercise, a pseudo-choice and a betrayal of the principle of self-determination.

On 5th April 2009, the anniversary of the Day of Hope 1961, which commemorates the New Guinea Parliament in 1961, International Lawyers for West Papua (ILWP) was launched. 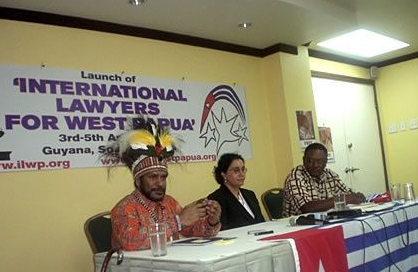 The ILWP’s mission is to help the indigenous peoples of West Papua to exercise their right to self-determination under international law. ILWP was launched in Guyana, South America. Speaking from Georgetown, Melinda Janki, co-founder of ILWP, explained why Guyana had been chosen as the launch country.

Also present at the launch was Colin Andrews, Chair of the National Toshaos Council and head of all indigenous peoples in Guyana. He pledged support for ILWP in it’s work to help bring about self-determination for the people of West Papua. Following the launch Benny Wenda was invited to visit Amerindian communities and share his experiences with them. Throughout his visit Amerindian leaders and their communities raised the Morning Star flag in solidarity with their indigenous brothers and sisters in West Papua and pledged their support for their struggle.

In West Papua, and throughout Indonesia, thousands of Papuans took to the streets to support the launch of ILWP.

In the West Papua state capital of Jayapura, peaceful demonstrations were met with a violent response from the Indonesian security forces. Hundreds of demonstrators were arrested and driven away on police and army trucks.

Many protestors shared stories of extreme torture committed against them. Two West Papuans died as a result of their treatment.

Against a backdrop of rising support for ILWP amongst Papuans, the Indonesian Government accused supporters of ILWP as committing treason against the state, and a crackdown continued in the months ahead.

In February 2011 Benny Wenda travelled to Papua New Guinea for a launch event of ILWP ‘The PNG Chapter’ in the capital, Port Moresby.

The event was co-hosted by Powes Parkop, Governor or Port Moresby and a long-time supporter of the West Papua independence struggle.

It was during this trip that plans were also formulated for the launch of an office for the Free West Papua Campaign in Port Moresby too. This opened in 2013.

During his visit, Benny also helped coordinate the ongoing legal investigation being carried out into the Sunset Merona raids on West Papuan refugee settlements.
These raids had seen hundreds of Papuan refugees forcibly resettled from their homes near the border of West Papua and Papua New Guinea.

Speakers at the launch event included the highly respected QCs Jeffrey Robertson and Mark Stephens, who both outlined the legal right of self-determination for the people of West Papua.

John Saltford, author of a book about the Act of Free Choice also spoke in detail about how the 1969 vote was flawed and was not a true act of self-determination. 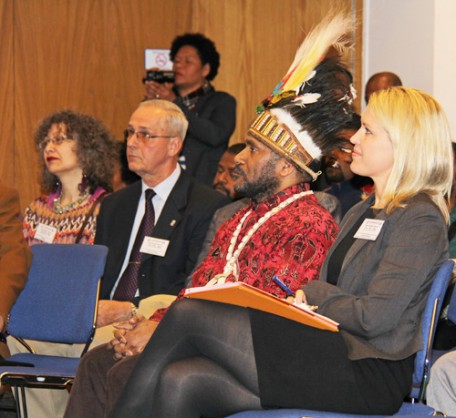 In April 2012, Benny Wenda and Jennifer Robinson launched the New Guinea Council at the Hague, Netherlands.

The aim of the council is to examine pathways to the reinstatement of the New Guinea Council or Nieuw-Guinea Raad. This was a parliamentary representative body formed in West Papua in 1961 at the end of Dutch rule. It had originally been requested to make its wishes on self-determination known within a year, but on 18 October 1961 received news of a United States effort to involve the United Nations in a new colonization of the territory. During an emergency session the council drafted a national manifesto and symbols including the Morning Star flag for a new national identity to be known as “West Papua”.

The Dutch Chapter of International Lawyers for West Papua (ILWP) launched in November 2014, at the Nieuws poort Press Centre in Den Haag/The Hague. It was attended by many Dutch and West Papuan lawyers. During his speech, Benny spoke of the importance of ILWP in helping to push forward the rights of his people to self-determination and freedom in eyes of the international community.

Right across West Papua, there were demonstrations and gatherings in support of this event – in Port Numbay/Jayapura, Mnukwar/Manokwari, Lapago/Wamena, Biak, Sorong, Merauke, Kaimana, PakPak, Nabire, Timika and Dogiyai. There were threats and arrests by Indonesia officials made in Merauke, Kaimana, Nabire and Dogiyai. In Nabire and Dogiyai, 25 West Papuans were arrested and 3 people were shot, with others tortured by the Indonesian police.