Benny Wenda and Filep Karma have been nominated for the 2013 Nobel Peace Prize. Their applications were successfully submitted to the Nobel Committee by members of the Department of Politics at the University of Reading, UK in January this year.

They have been nominated for the world for their lifetime’s work in struggling for peace, freedom and justice for West Papua. The winner will be announced this Friday 11th October

The Nobel Peace Prize award is one of the most renowned awards in the world and is awarded by the Nobel Committee to those who have “done the most or the best work for fraternity between nations, for the abolition or reduction of standing armies and for the holding and promotion of peace congresses”.

The winner of the Nobel Peace Prize will be revealed this Friday 11th October so please keep both Filep and Benny in your hearts and prayers and help to spread the word about their nominations as we can really publicise West Papua in the light of the run up to this historical nomination.

We would like to take this opportunity to thank all supporters of Benny and Filep and all West Papuan people who with your help will finally be able to live in freedom in their own independent country.

Benny Wenda and Filep Karma (for joint or individual consideration)

Benny Wenda and Filep Karma have both devoted their lives to a just and peaceful solution to the conflict in West Papua, the western part of the island of New Guinea. West Papua, a province of Indonesia, continues to experience a slow genocide that has killed an estimated half a million Papuans since 1961. The struggle for peace and self-determination in West Papua has remained largely unreported, since Indonesia restricts the entry of foreign journalists and humanitarian organisations: in the face of this silence the efforts of Benny Wenda and Filep Karma are all the more courageous and vital. 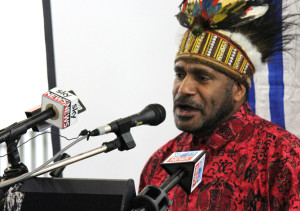 Benny Wenda grew up in the Highlands of West Papua. As a child, he watched close members of his family raped and killed at the hands of the Indonesian army. His leg was injured by an Indonesian aircraft attack on his village which left him with pain and difficulty walking for the rest of his life. Later, he became leader of the ‘Koteka Assembly’ and assumed a central role as leader of the peaceful campaign for Papuan independence. In 2002 he was unlawfully arrested and detained in solitary confinement by Indonesian police. During his time detention he was tortured and threated with death. He managed to escape and sought asylum in the UK, where he now lives with his wife and six children. In 2004 Benny Wenda founded the Free West Papua Campaign. Despite all that he has been through Benny still advocates a peaceful route to self-determination for his people. Through his initiative and leadership, the campaign has expanded from a small core of volunteers into a thriving network of impassioned activists, lawyers, and parliamentarians. Benny Wenda launched the International Parliamentarians for West Papua (IPWP) at Westminster Abbey in 2008, and has since followed with events in the European Parliament, the Scottish Parliament, the United States, Australia, New Zealand, Papua New Guinea, and in South America. IPWP is supported by 100 MPs and MEPs who are committed to supporting Benny Wenda’s peaceful advocacy for self-determination and peace in West Papua. He has spoken at some of the world’s leading universities and has travelled around the world to publicise the plight of his people. 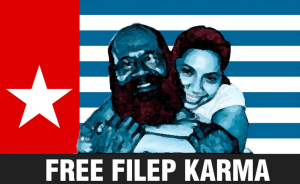 Filep Karma is a prominent Papuan political activist and former Indonesian civil servant who is serving a 15-year prison sentence for raising a banned flag at a 2004 political rally. He was arrested on December 1, 2004, for organizing and participating in a ceremony at Trikora Field in Abepura, Papua, at which several hundred Papuans gathered to raise the Papuan Morning Star flag and celebrate the anniversary of the 1961 Papuan declaration of independence from Dutch rule. He was sentenced to 15 years in prison. His wrongful arrest, detention, and trial violate Indonesian law and Indonesian obligations under international law. He is currently detained in a prison in Abepura in Papua and has suffered from ill health. He was denied necessary medical attention and was denied needed prostate surgery for nearly a year. Numerous organizations have cited Mr. Karma’s wrongful detention, including Human Rights Watch and Amnesty International, which has designated Mr. Karma a prisoner of conscience. In addition, numerous members of the U.S. Congress have called for his release, and the U.S. State Department has cited Mr. Karma’s status as a political prisoner.

Things are not getting ‘better’ in West PapuaInterview on Democracy Now