Benny Wenda’s statement on the current situation in West Papua 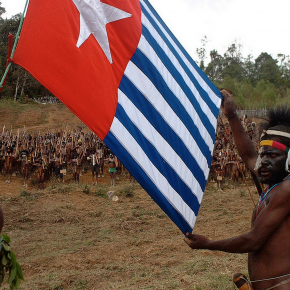 I am writing this statement today to express my concerns over current events within West Papua. I want to tell the world that now is a time when our people are in incredibly grave danger, especially those who have become refugees.
This month, with the upcoming boycott of the Indonesian elections by the West Papuan people, our people are facing many worries. We desperately need international attention and support during this time of increased Indonesian military violence in our country. On April 6th 2014, Indonesian military and police clashed with West Papuans at the Wutung border crossing point near Vanimo, Papua New Guinea.

Following this incident, the leader of the Papua New Guinea opposition, Mr. Belden Namah, who grew up in the border area, released a media statement. He said “The people of West Papua are being butchered like animals by Indonesian security forces for rejecting Indonesian rule. Papua New Guinea has a moral obligation to raise the plight of West Papuans and their struggle for independence with the Indonesians and before international bodies and forums.”

I know this border post very well and, as Papuans, over the last 50 years our observation is that any pro-independence activities that occur close to the border make the Indonesian Government extremely worried. They will therefore likely send their military across the border into Papua New Guinea to look for West Papuans to punish and persecute.

They will look for West Papuan refugees near the Vanimo border and deport them to Indonesia where they will be killed. As a former refugee in Vanimo myself, I am deeply worried and concerned about these threats that many of my people, friends and family in Vanimo are now facing. Before something terrible happens, we need to tell the world about this situation.

In the last few years, the Indonesian government has been trying to find and persecute Papuan refugees, in an attempt to discourage pro-independence sentiment along the border. These attacks regularly involve the burning of West Papuan refugee camps, forced deportation and even armed attacks on refugees. Most notably, in 2011 Indonesia instigated the notorious “Sunset Merona” operation which left over 19 West Papuan refugee houses burnt to the ground. Over 75 men, women and children were forcibly detained and food for refugees was destroyed. In 2008, the Indonesian military crossed the border, attacking PNG and West Papuan people and burning villages. Incidents like this have happened many times in the past and continue today.

We urgently need the United Nations and the world to see what is really happening to our people. Sometimes it feels like everyone has forgotten that more than 10,000 West Papuan refugees suffer daily in Papua New Guinea. On the 6th of April West Papuan refugees raised the flag of the UN at the Wutung border post. My people are urgently asking for UN intervention to stop the Indonesian military from killing more of our people.

I myself know how incredibly difficult it is to be a West Papuan refugee in PNG. Our people still face massive food shortages, have little or no education and fear the constant threat of Indonesian military violence.

I am calling upon Human Rights Groups, foreign governments, especially Melanesian governments to work with NGOs and the PNG government to act in any way possible to prevent further tragedies, such as Sunset Merona, from happening again.
Please hear our voice; we need to act now to stop Indonesia from killing more innocent Papuans.

Thank you very much for all your ongoing help and support.
My warmest and deepest regards to you all,