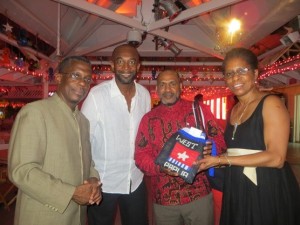 Nobel Peace Prize Nominee and Free West Papua Campaign founder Benny Wenda has been on an official visit to the Caribbean island of St. Martin where he gathered enormous support and recognition for West Papua’s struggle for self-determination and independence, from the Caribbean people who also presented him an award. This came after Benny was invited to come and talk on the island by Mr. Lasana M. Sekou, one of the most famous poets and authors of the region.

This was Benny’s third official visit to the Caribbean region and he received huge support from the people he met, including the governor, Mr Eugene Bernard Holiday.
Benny was officially invited to attend the 12th annual St. Martin Bookfair where he held a workshop about the situation in West Papua.

On Saturday night, at the Chamber of Commerce, Concordia, Benny was also awarded with an African wood statuette, the esteemed President’s Award by during the closing ceremony of the Bookfair.

Support from the Caribbean people 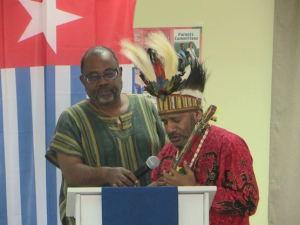 Benny said “the Caribbean people welcomed me with open hearts” and he is very grateful for all the support and sympathy he received on his visit.
Those present told Benny that the “West Papuan struggle is now the Caribbean’s struggle”
and that “we, the islands which make up the Caribbean are small but internationally our voice is very big”
World renowned HNP author Lasana M. Sekou gave an incredibly strong statement of support for the people of West Papua

“The Caribbean people, artists, authors, and eventually our governments rose to the forefront, hold an outstanding record in the defeat of the Apartheid regime in South Africa and the release from prison of the Madiba, Nelson Mandela. Even as we struggle to correct wrongs and better our own lives within our nations and region, another nation, in another region of islands, is calling us to raise the banner one more time, to meet in such a whirlwind once again. We respond, oui, because this is also who we are as ‘Caribbean People.’
FREEDOM FOR WEST PAPUA!”

He was told by the Caribbean people that they were so shocked and could hardly believe that West Papua was still suffering under colonialism in the 21st century. 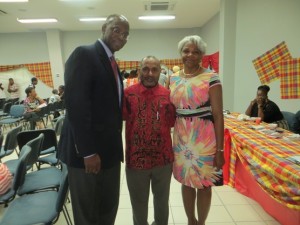 During the closing ceremony of the Bookfair there was an historic moment as Benny was presented with the esteemed President’s Award by Book Fair coordinator Shujah Reiph and President of House of Nehesi Publishing (HNP) Jacqueline Sample.

Those present in the audience included Governor Eugene Holiday and his wife, the Minister of Education, Cultural Affairs, and Sports, Patricia Lourens-Philip, SXM Airport Managing Director Regina Labega and the Territorial Councillor Annette Philips from the Collectivité.

This ground breaking award presentation was also reported by The Daily Herald, the leading newspaper in the North Eastern Caribbean which described the situation in West Papua as genocide and right across the audience, Benny was given a great amount of support and sympathy for his people’s struggle for freedom. Shujah Reiph stated that Benny was “standing up for the same reasons that led to Mandela’s imprisonment for 27 years.”

Benny nominated for the Nobel Peace Prize AgainWest Papua: my people need Australia’s help before it is too late