West Papua: my people need Australia’s help before it is too late

Home / Updates / West Papua: my people need Australia’s help before it is too late 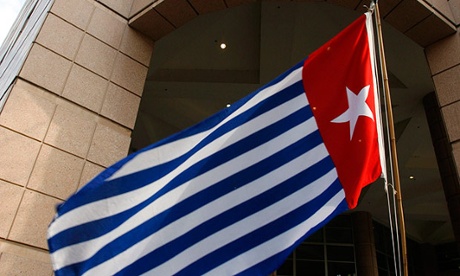 Article by Benny Wenda published in The Guardian

This Anzac Day weekend, we opened the first ever Free West Papua campaign office in Australia.

For more than 50 years, my people have suffered what I considered to be a slow-moving genocide under the repressive military occupation of Indonesia. During the second world war, the “Fuzzy Wuzzy Angels” of West Papua came to the aid of Australian soldiers. Now it is the West Papuans that need Australia’s help in order to end human rights abuses so that my people can be free to live in peace.

Indonesia’s response to West Papua advocacy abroad has been frighteningly vehement. After the opening of our UK office in 2013, Indonesia made a diplomatic complaint to the British government. Foreign minister Natelegawa said he could not understand why the British government was “unwilling to take steps against the Free West Papua office”, and the president even tweeted about it. The British ambassador in Jakarta was summoned and had to remind Indonesia of the protections enjoyed in democracies, pointing out that no steps would be taken against our office, since it “does not require [government] permission to open”.

Bob Carr revealed in his recent memoir that he had discussed the prospect of us opening an Australian office with Indonesia’s foreign minister at that time, and was told that Indonesia would “prefer [Australia] not to allow an office to open”. During his state visit to Indonesia last year, prime minister Abbott said last year that West Papuan activists were not welcome in Australia, and that Australia would not tolerate West Papuans’ demonstrations against Indonesian control.

But we hope that the Australian government will follow the example set by the British government: reminding Indonesia that, unlike in West Papua where people are sent to prison for 15 years for merely raising a flag, Australia is a democracy where freedom of speech is protected and where West Papuans and those who support us can speak out about our desire for self-determination.

The Australian public clearly has much sympathy for West Papua and for our cause – both historically and today. Australia initially prepared to go to war with the Dutch to prevent Indonesia’s invasion of West Papua in the early 1960s. As a result of Cold War real-politik and US pressure, Australia stepped out of the dispute. Much like the support for Indonesian control over East Timor until 1999, the Australian government has so far refused to acknowledge West Papua’s claim to self-determination out of concern for its relationship with Indonesia. Like in East Timor, the law is on our side. If Australia can change its position on East Timor, it can change its position on West Papua.

Despite the government’s current position, the Australian public remains supportive. An opinion poll commissioned in 2006 showed over 75% of Australians support self determination – including the option of independence – for West Papua. My last visit to Australia was for a 2013 TEDx event where I spoke  alongside my lawyer, Jennifer Robinson. We received two standing ovations from a packed out Sydney Opera House, and I was overwhelmed by the support and encouragement we received from the audience.

Predictably, Indonesia was concerned. Some officials argued that Indonesia should cut diplomatic ties with Australia for allowing me the opportunity to speak about my people’s cause. A few days later, Australia’s then foreign minister Bob Carr responded in the Senate, saying that Australians supporting West Papua’s claim to self-determination was “an appalling thing to do”. In his memoir, Carr refers to our office opening in Oxford, alleging we are “provocateurs who encourage Papuans to put their lives on the line”, and spoke with concern about the prospect of an office opening in Australia.

What is appalling is how my people have been betrayed by the United Nations and by the international community and left to suffer at the hands of a brutal Indonesian military regime. What is appalling is Indonesia asking Britain and Australia to compromise on their own values and freedoms in order to silence us.

We are not provocateurs, but advocates for the rights of the West Papuan people. As a leader in exile, I have an obligation and duty to my people to use the democratic freedoms I enjoy abroad to speak out about their suffering. The only people putting Papuan lives on the line are those who kill peaceful activists with absolute impunity (more than 22 of them were killed in 2012 alone).

My people’s lives remain on the line – and the nations who continue to support Indonesian control are complicit. We aim, through opening the office in Australia, to raise awareness about the illegality of Indonesia’s occupation, and about this ongoing violence.

Raising awareness is important, especially when Tony Abbott claims that West Papuans are “better not worse off” under Indonesia. This is just not true. It is estimated that more than half a million West Papuans have been killed since Indonesian occupation in the 1960s. We are the poorest province in Indonesia, despite being the richest in natural resources. Literacy is very poor – the worst in Indonesia. Health statistics are grim. We are suffering an HIV/AIDS crisis with the highest rate of infection in Indonesia. There are at least 73 West Papuan political prisoners in Indonesia today. I cannot and will not remain silent while my people suffer.

Australia has before taken a stand against Indonesia in order to respect international law and protect West Papuans. In 2006, Australia granted asylum to 42 West Papuans after concluding (correctly) that, as activists advocating independence for West Papua, they would be persecuted if they were returned to Indonesia. This decision was taken in accordance with Australia’s obligations under international law, and Australia should be commended for standing by that decision despite Indonesia recalling its ambassador.

We hope that Australia will withstand pressure from Indonesia over the opening of our office. Lest we forget: by the time Australia changed its political position to support East Timor, close to a third of its populationhad been killed by the Indonesian military. My people need Australia’s help before it is too late.