Benny Wenda has written this statement after the Indonesian increase on the West Papua/PNG border, and the reports of hostages being taken there.

Recently along the Papua New Guinea/West Papua border there has been a massive deployment of at least 700 Indonesian soldiers, spreading growing fear and threat on both sides of the border. The Indonesian military already has an enourmous presence in West Papua, making it the most heavily militarized conflict zone in the Pacific.
Now there are over 40,000 Indonesian soldiers stationed in West Papua and many of them are constantly patrolling at the PNG border. These soldiers have consistently made illegal incursions into the PNG with alarming regularity.
As photo and video evidence photo shows, Indonesia is treating West Papua and the PNG border like a war-zone.

This video shows the 700 Indonesian soldiers arriving in West Papua.

Indonesian President Joko Widodo recently claimed that “there are no more problems in West Papua”.
If that was true, why does he continue the shipping of tens of thousands of Indonesian soldiers to West Papua?
Furthermore, Indonesia is not at war with Papua New Guinea, so why are they sending hundreds more soldiers to the PNG border as well?

The Indonesian government is desperate to avoid further condemnation of this heavy military build up.

In the past few days there have been reports, mainly from the Indonesia  media of Indonesian loggers being kidnapped by West Papuans living in PNG, and later being rescued. I want to state very clearly and categorically that neither myself nor the Free West Papua Campaign are in any way affiliated with anyone advocating kidnapping or any violence. I do not know who is responsible in any way with this alleged kidnapping but I do know that the Indonesian military is always blaming the people of West Papua so that they can justify more violence and murder of West Papuans. I strongly suspect that the Indonesian military is once again trying to stir up more conflict along the border in an attempt to make their massive border deployment and systematic oppression of West Papuans seem acceptable and to gain more popularity for the Indonesian government.

Only last week, West Papua’s top soccer team Persipura Jayapura (internationally renowned in the region as one of the best teams) were stopped by Indonesian officials at the PNG border, even though a friendly soccer match had been formally arranged between Persipura and the PNG national team. This was due to be part of Papua New Guinea’s 40th Independence Celebrations but the Indonesian government is so scared of West Papuans and PNG solidarity with the freedom struggle, they don’t even want our soccer team playing outside West Papua.

There is further suspicion that the entire “hostage case” was manipulated and directed by the Indonesian government.
Recently, Zainal Abidin, an Indonesian “political expert” said, “People will naturally praise Joko (the Indonesian President) for helping free the two Indonesians,”

He even said, “I think it’s only fair we remain suspicious, this may have been a scenario created by the [Indonesian] government to boost its popularity,”. 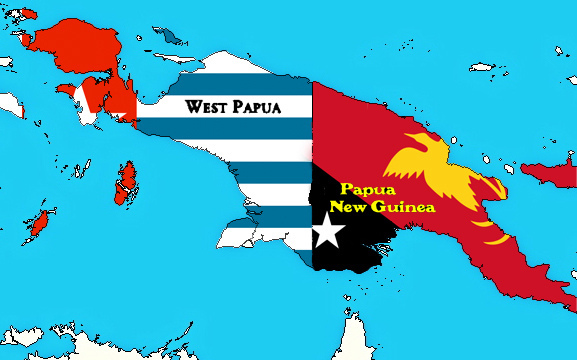 My people know the truth of what the Indonesian government is doing in West Papua. Ever since they illegally took control of the country in 1969, they have been massacring us like animals and creating systematic violence and panic in an attempt to confuse the world about the real murderous situation. Over 500,000 innocent West Papuan people have died in what has become known as a secret genocide.

Everywhere I go, I tell the world the truth about the horrors my people face on a daily basis and so my central message for this statement now is that there is a very real possibility that this situation was manipulated by the Indonesian government to spread their own propaganda against the Free West Papua struggle. Our peaceful movement has nothing to do with this hostage situation at all.