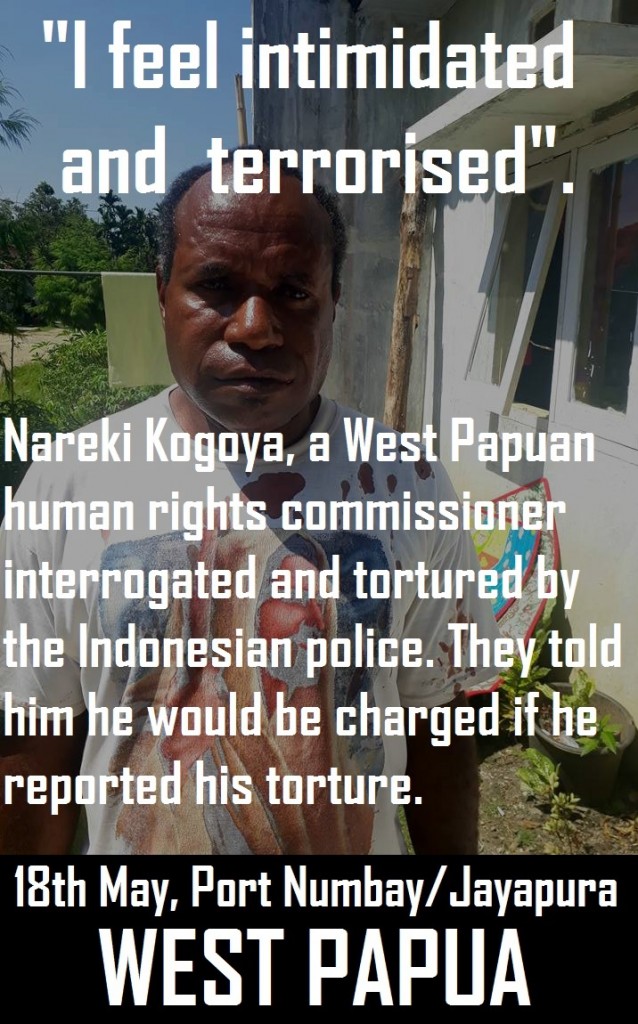 They look upon us as subhuman because of the colour of our skin. We are not animals, we are West Papuan people.

This is a man who actually represents West Papua in the Indonesian National Human Rights Commission. If this is how representatives of government agencies are treated in the capital city of West Papua, what about ordinary people? What about activists? What about the people in the villages whose stories never get told, who are killed by the Indonesian military and police like animals with no media attention?

In West Papua, it doesn’t mater if you are a peaceful protester, a journalist, a human rights commissioner or an ordinary person on the street; anyone can be the next person to be arrested, tortured and killed by the Indonesian military and police.

We need to urgently alert the world. This is what Indonesia’s so called “democracy” looks like in colonial, occupied West Papua. There is no democracy for the people of West Papua and nor will there ever be until we are allowed to freely exercise our fundamental right to self-determination in an Internationally Supervised Vote. Our strengthen and resolve for this fundamental right only grows stronger every day. People living under colonialism never experience true democracy until they are free.

I must state that all that the Indonesian government has claimed about human rights and democracy in West Papua is FALSE and everything that they have claimed about resolving past cases in West Papua is FALSE. Every day, West Papuan people are persecuted and have our human rights violated by the Indonesian government. Over 500,000 people have already been killed in this Neglected Genocide.

The torture of Nareki Kogoya then, is more evidence that the Indonesian government is not complying to the United Nations Universal Declaration of Human Rights. There is no freedom of expression, freedom of press or freedom of assembly; there is NO freedom in occupied West Papua.

On behalf of the people of West Papua, I appeal to the world and people everywhere including at a parliamentary level to urgently please look to the deteriorating human rights situation in occupied West Papua and to immediately Take Action to help to stop this ongoing Neglected Genocide.

If the Indonesian government is serious about human rights in West Papua, they must allow full access to human rights inspectors, foreign journalists and other international observers. We want to live as good neighbours with Indonesia when we are free. If the Indonesian government is serious about peace, democracy and international law, they MUST allow the people of West Papua to exercise our fundamental right to self-determination in an Internationally Supervised Vote.

We desperately need more international support before it is too late. Please support the people of West Papua and our fundamental right to self-determination.

Indonesian troops arrest West Papuan people and raid their office for supporting the petitionMassacre of 5 people in 24 hours – Under Indonesia, West Papua is becoming another East Timor