Home / Updates / ULMWP has clear message: dialogue with Indonesia is not the answer for West Papua 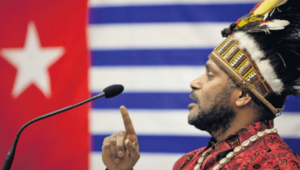 ULMWP has clear message: dialogue with Indonesia is not the answer for West Papua

The United Liberation Movement speaks with one voice and with one clear message; we demand the freedom of our people and nation from colonial rule is delivered to us through a genuine act of self-determination, in the form of an internationally supervised vote.

Our position also remains crystal clear that there is no room for dialogue with Indonesia; the time for that has long passed. Instead, as pointed out yesterday by Secretary Rumakiek, the only place for ‘dialogue’ on the issue of West Papua is the floor of the UN, where the wrongs of the past must now be corrected. The ULMWP seeks to remind key players at the UN of the legacy of failure they inherit, as well as their sacred duty under their Charter to ensure the decolonisation process is completed by giving the West Papuan peoples their inalienable right to self- determination.

Secretary Rumakiek’s comments echoed the sentiment expressed by PNG’s Prime Minister and current Chair of the MSG, the Hon. Peter O’Neill, who recently stated he would like to encourage others to take the issue of West Papua to the UN. “We are encouraging that this be put to the decolonisation committee of the United Nations,” he also said.

The recent reports from Amnesty International and the International Coalition for Papua, that both highlight the huge number of extrajudicial killings carried out by Indonesian Security forces against our people, should show the international community why ULMWP dialogue with Indonesia is not possible. It would also be a betrayal of our people and the 500,000+ who have lost their lives under Indonesian occupation.

The only solution is for us to be allowed a genuine act of self-determination, through an internationally supervised vote.

Honorary Freedom of the City to be awarded to Benny Wenda