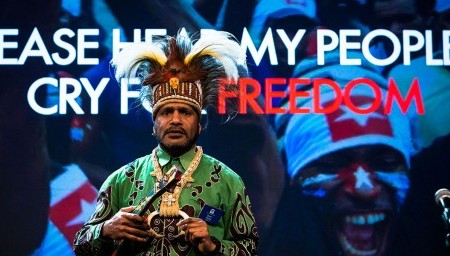 Yesterday, in response my recent interview with CNN, the Indonesian government has said it wants the United Liberation Movement for West Papua (ULMWP) to leave Indonesia.

Coordinating Minister for Politics, Law and Security, Luhut Binsar Pandjaitan gave a furious interview and said about the ULMWP, “They already just joined the MSG (Melanesian Spearhead Group). No need to stay in Indonesia again.”

On Monday 15th February, the United Liberation Movement for West Papua, of which I am the Spokesperson, opened a new office in Wamena, West Papua, with the support of the Chairperson of the Melanesian Spearhead Group and Prime Minister of the Solomon Islands, Hon. Manasseh Sogavare. Over 5000 people attended this historic launching which marks a new era in my people’s history as the United Liberation Movement for West Papua is now spreading around the country, uniting West Papuans from all the different tribes and villages with one common agenda – Independence.

We West Papuans do not want the Indonesian government to continue to illegally occupy our country and kill our people. Over 500,000 innocent West Papuan people have been killed ever since Indonesia illegally occupied West Papua and took control at gunpoint through the so called 1969 Act of Free Choice (known to West Papuans as the illegal Act of NO Choice.

The threats of Luhut Binsar Pandjaitan bring back painful memories for my people because just before the Act of NO Choice 50 years ago, Indonesian General Ali Moetoerpo told West Papuan leaders, who would participated in the act that, “Indonesia did not want people of West Papua, Indonesia just wanted the land and natural resources of West Papua.  If you want to be independent, ask God to find you another Island in the Pacific. Or, perhaps write to the Americans, they have already set foot on the moon, and might find you a place there.”

The United Liberation Movement for West Papua will never leave West Papua. It is part and parcel of the West Papuan people. We are the voice of our people who have been screaming for Independence ever since our country was illegally occupied by Indonesia. West Papua is our home. We are not leaving.

We will continue to peacefully campaign around West Papua, around the Pacific and around the world until West Papua is finally Independent and free at last.