Home / Statements / Statement after Timika arrests: Why is the Indonesian government scared of Melanesian unity?

Yesterday, 5th April marks exactly 55 years to the day that the West Papuan parliament or Niuew Guinea Raad was first launched in 1961. It is what we West Papuans refer to as the Day of Hope as it marked the first steps on our journey to full freedom and Independence. But yesterday, our Day of Hope became a day of suffering.

Thousands of West Papuan people in the town of Timika marched through the streets to call for an Independence referendum, an Internationally Supervised Vote for West Papua. They also showed their support for full membership of the Melanesian Spearhead Group (MSG) for the The United Liberation Movement for West Papua – ULMWP.
After the peaceful rally, West Papuans held a peaceful prayer meeting and raised flags of our fellow Melanesian nations. But the Indonesian authorities are terrified of this show of Melanesian unity. 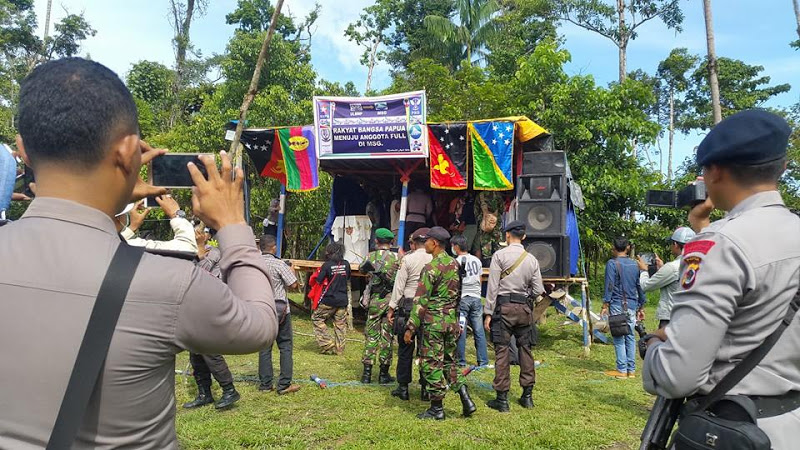 Just last week, the Indonesian Security Minister Luhut Binsar Panjaitan came to West Papua despite protests by my people refusing his arrival after he told us to “leave Indonesia and go to Melanesia”. The Security Minister also went to Papua New Guinea and Fiji were he tried to claim that Indonesia cared about the people of Melanesia. The motives behind the visit, which included “conditional aid” was condemned by the Pacific Conference of Churches and others. It shows the real double standards of the Indonesian government.  The Chairperson of the Melanesian Spearhead Group, Solomon Islands Prime Minister Hon. Manasseh Sogavare put it exactly right when he said that this “demonstrated the clear need for the MSG to continue to hold on to the core values of self-determination for West Papua.”

On one hand, the Indonesian authorities hand out “conditional aid” money and demand that Melanesian nations do not support their wantoks in occupied West Papua.

One the other hand they open fire on a peaceful West Papuan gathering, beat people up and tear down the flags of our fellow Melanesian nations?

There are two things that became very clear yesterday in Timika. The Indonesian government is terrified of Melanesian unity and the Indonesian government is terrified of West Papuan self-determination. They showed this by storming and opening fire at a peaceful gathering of West Papuans praying for full membership of the Melanesian Spearhead Group and an Internationally Supervised Vote (Independence referendum.) 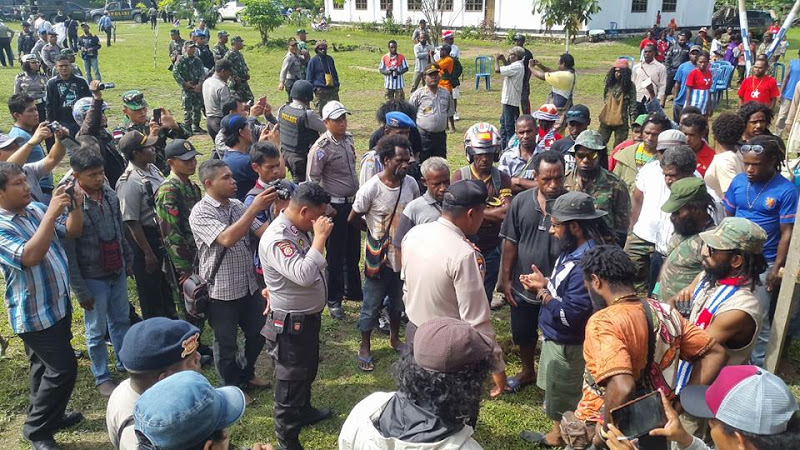 If the Indonesian government cares about the Melanesian Spearhead Group then they should abide by the values of the MSG which explicitly supports the right to self-determination for the people of West Papua.

If the Indonesian government cares about the Melanesian Spearhead Group then they should abide by the values of the MSG which have recognised the United Liberation Movement for West Papua (ULMWP) as a legitimate representative of the West Papuan people.

It is our fundamental right as human beings to peacefully exercise our self-determination, and we call for our right to self-determination to be exercised freely in an Internationally Supervised Vote (Independence Referendum.)

Despite the ongoing genocide and illegal Indoensian occupation of our country, we West Papuans are completely confident that we will one day be full members of the Melanesian Spearhead Group and one day we will be free people at last.

*I hope that people around the world will look with sympathy and support when they see the suffering of my people. Please also help to support these brave people locked behind bars yesterday so that we can all send a clear message to the Indonesian police that it is unacceptable to lock up peaceful activists just for stating their views.

Please call the Head of the Indonesian Police in Timika on +6285261922003 and ask him to release those arrested yesterday. In the past West Papuan activists have been released because of phone calls to the Indonesian police from international supporters.

It is believed that between 9 and 15 people were arrested in Timika. The 13 people that have been reported as being arrested are: