In the last month the world has seen a huge growth of international solidarity for West Papua’s freedom as we launched a truly historic meeting at the British parliament in Westminster calling for an Internationally Supervised Vote to peacefully determine the future of the West Papuan people. Now there are entire nation states who are actively supporting the people of West Papua and our fundamental right to self-determination. However this international surge has fueled intense hatred and fear by the Indonesian government and the Indonesian military who have begun to stir up conflict are believed to be actively encouraging violent Indonesian militia groups to burn the West Papuan flag and cause as much disrespect to to West Papuan culture and the West Papuan people as possible. In fact today it is reported that a West Papuan mother and her friend were beaten up by these violent militia just for asking what they were doing. 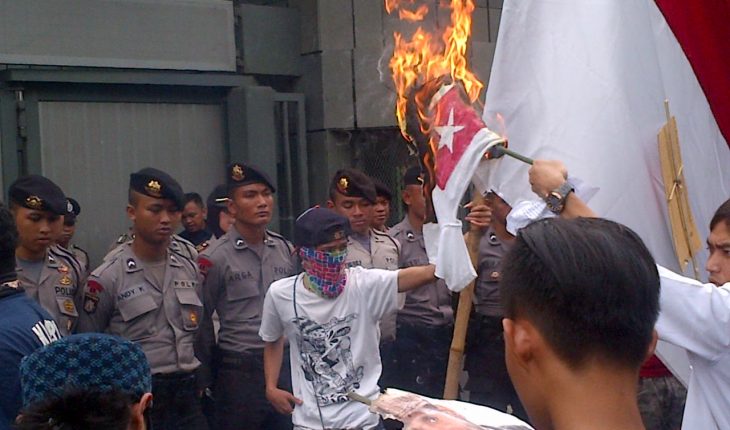 Now that international solidarity for West Papua is reaching new heights and still growing every day, the Indonesian authorities have shown their true fear by trying as hard as they can to stir up more conflict and bloodshed in West Papua; trying to provoke our peaceful pro-Independence movement by burning West Papuan flags and demonizing our leaders and supporters. The vast majority of these militia responsible are Indonesian migrants who it is believed are being actively encouraged by the Indonesian government, military, police and intelligence services to cause violence and chaos.

Last month it is estimated that over 2500 West Papuan people were arrested for demonstrating peacefully to call for our fundamental right to self-determination and freedom. We do not burn the Indonesian flag and do not cause violence yet why is it that when violent Indonesian militia groups rampage through West Papua, burning our national flag and beating West Papuan people, they get away with total impunity? 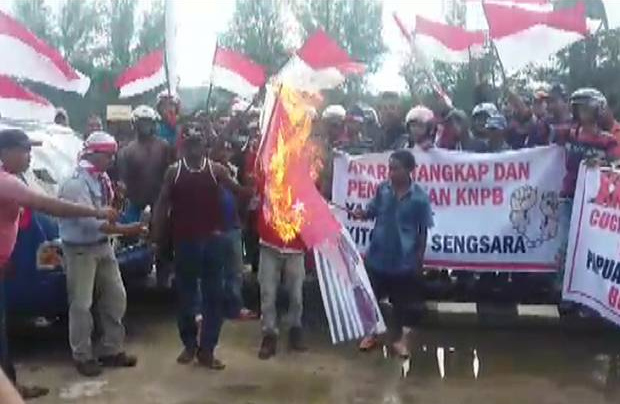 This is exactly what the Indonesian government did in Timor-Leste (East Timor) during the illegal occupation of the country. The world is well aware of the horrors these Indonesian militias committed against the people of East Timor, killing hundreds of people in the name of Indonesian sovereignty.

Therefore I appeal to all the people in West Papua, not to be provoked by these cowardly actions of the Indonesian militia and not to retaliate but to focus on our peaceful struggle and belief that freedom will come soon. We West Papuans have a proud history and proud culture of peacefully struggling for West Papua’s Independence. We are not struggling for revenge but for freedom. Therefore if Indonesia reacts with violence we will not respond back with violence. No matter what, we will continue to remain peaceful and never turn to violence. The world is watching us and they are certainly impressed with and supportive of our peaceful struggle for freedom. We will not let our emotions take control of us but we will remain strong and peacefully committed against this brutal genocide and illegal occupation of our country.

Our struggle is a struggle of the truth against lies. We West Papuans are standing on the side of the truth because we are struggling for our fundamental right to self-determination which was stolen from us in the illegal 1969 Act of NO Choice.

Let us show the world that we West Papuans are peacefully united as One People with One Soul and One Destiny – Independence. 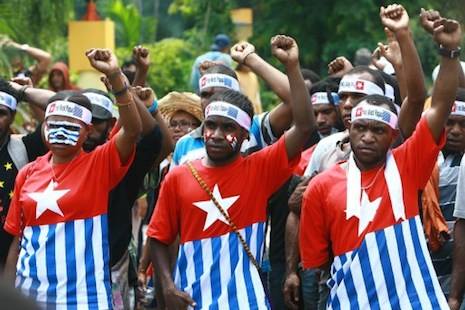 I also appeal to the International Community to be aware of the increasingly volatile situation in occupied West Papua and to please take action to stop this brutal violence. These Indonesian militia groups are a time bomb and we West Papuans know that they are ready to explode and massacre us as soon as the Indonesian military tells them to. On behalf of the people of West Papua I urge the International Community to please be aware and make sure that we do not repeat the bloody history of what happened in Timor-Leste (East Timor) where over a thousand East Timorese people were reportedly massacred by violent Indonesian militia.

We the people of  West Papua will show the world that we will not let the colonial Indonesian government dehumanize us and turn us against one another. Across the world, the West Papuan flag is flying freely in solidarity and support of the West Papuan people and our peaceful struggle for self-determination and freedom.

No matter how many times Indonesia burns our flag, they can never burn the West Papuan spirit which is committed to peacefully struggling for self-determination and freedom. No matter what Indonesia does, our time will come. West Papua will be Independent and free.

Statement on 1st May to 3rd May 2017. Global Action for West Papua

Indonesia must free the 4 political prisoners in Manado